Position and distance measurement in ports are key applications of our KY-LOC and KY-RAY product families. Movement of any container handling equipment (CHE, such a ship-to-shore cranes, stacking cranes, portal cranes, straddle carrier, terminal tractors, reach stackers, empty handlers) or bulk handling ship unloaders are determined reliably and maintenance-free, even next to and under massive STS cranes.

The sensors continue to operate interruptedly under challenging weather conditions like rain, fog, snow, or dust.

Collisions are avoided by continuously measuring the position and monitoring the environment of the respective CHE. Warning messages to CHE operators when coming close to other CHE or to protected infrastructure (e.g. light poles, power connectors) increase the operational safety and avoid any personal or equipment damage and associated interruptions in operations. 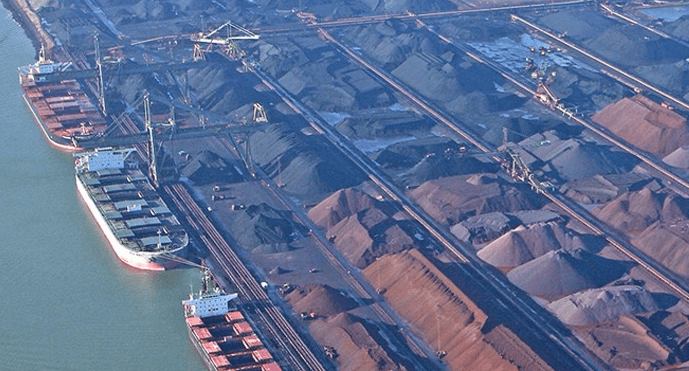 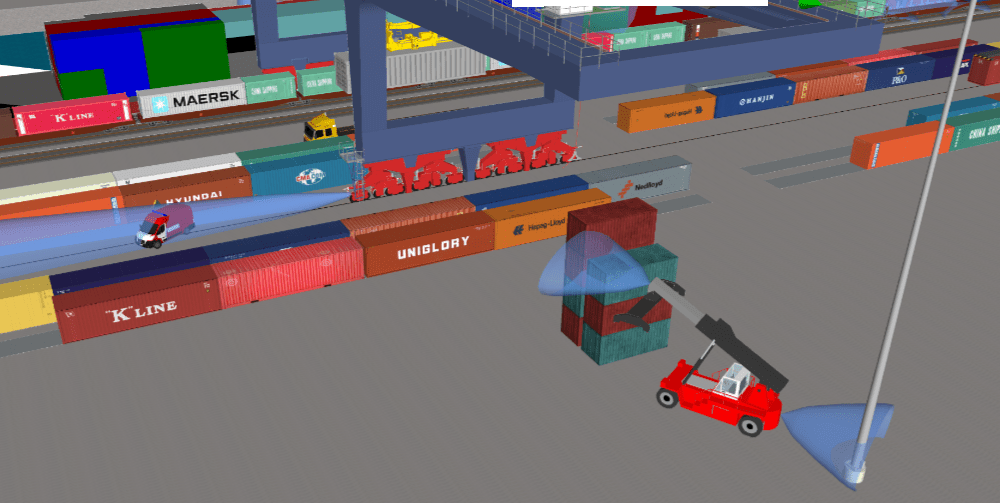 Deploying KY-RAY 3D.03.01 and KY-RAY 3D.04.01 sensors, preset zones can be monitored in 3 dimensions. Absence or presence of persons or objects can be determined and transmitted to operational control.
+ 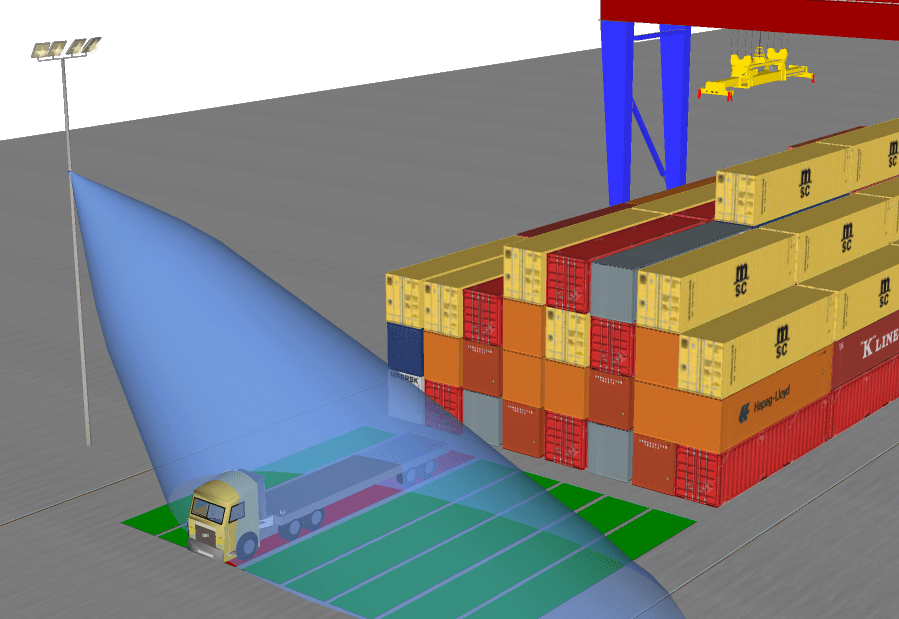 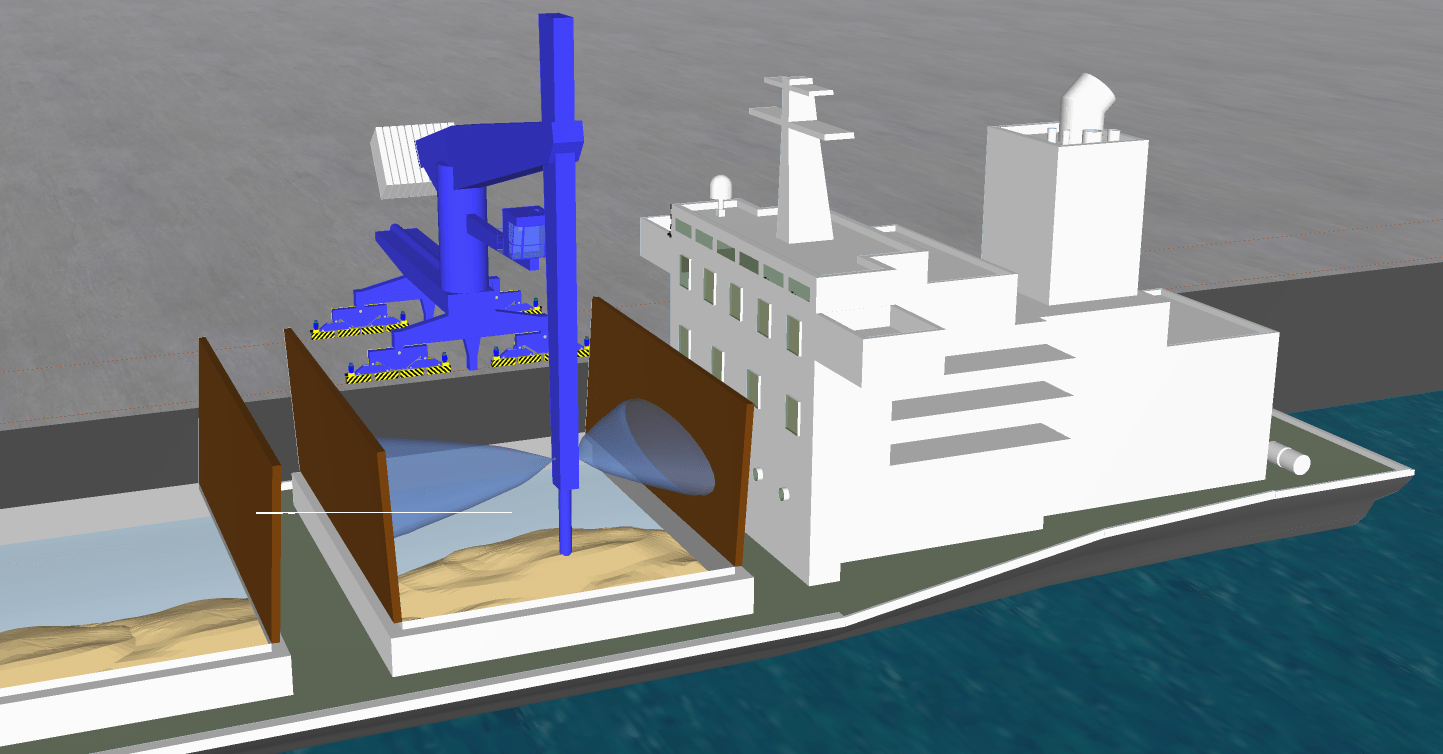 The KY-RAY 3D.03.01 Radar sensors can monitor transporting and filling processes, or help to continuously reconciliate the IT based container stack information by live measurements. 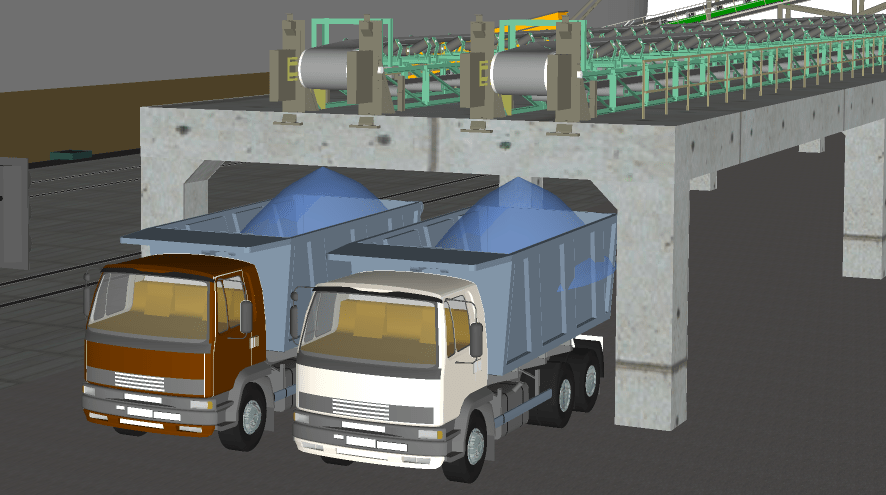 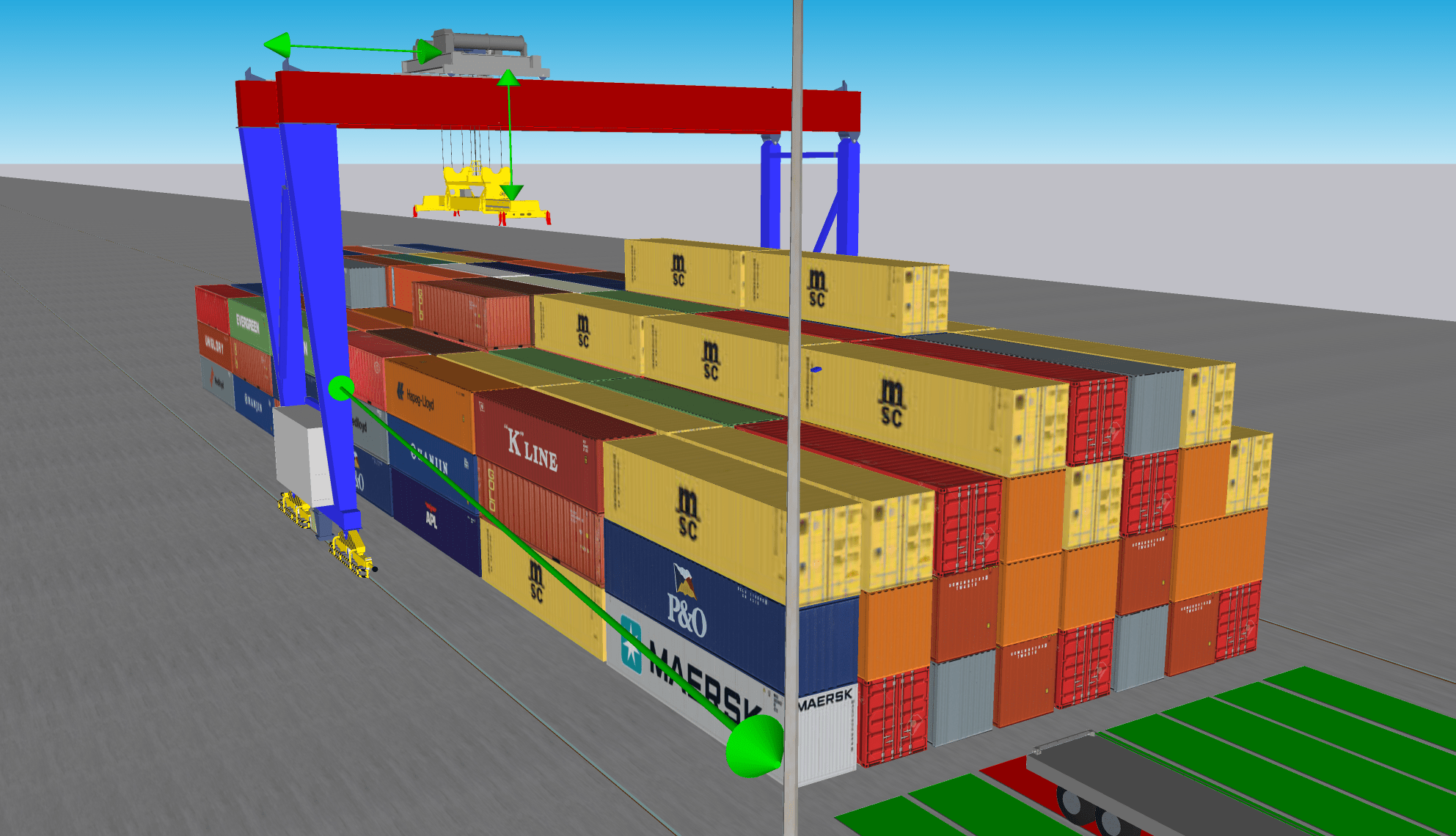 KY-LOC 1D.02.01 Radar sensors are applied for the XYZ axis measurement on gantry cranes. This also works on RTG (rubber tyre gantries) that change the area of operation in the stack.

KY-LOC 1D.02.02 is an ideal solution for new and retrofitted STA crane trolley position measurement. The sensor data is always precise, independent of any lengthening of ropes driving the trolley - maintenance-free and without continuous readjustment.
+ 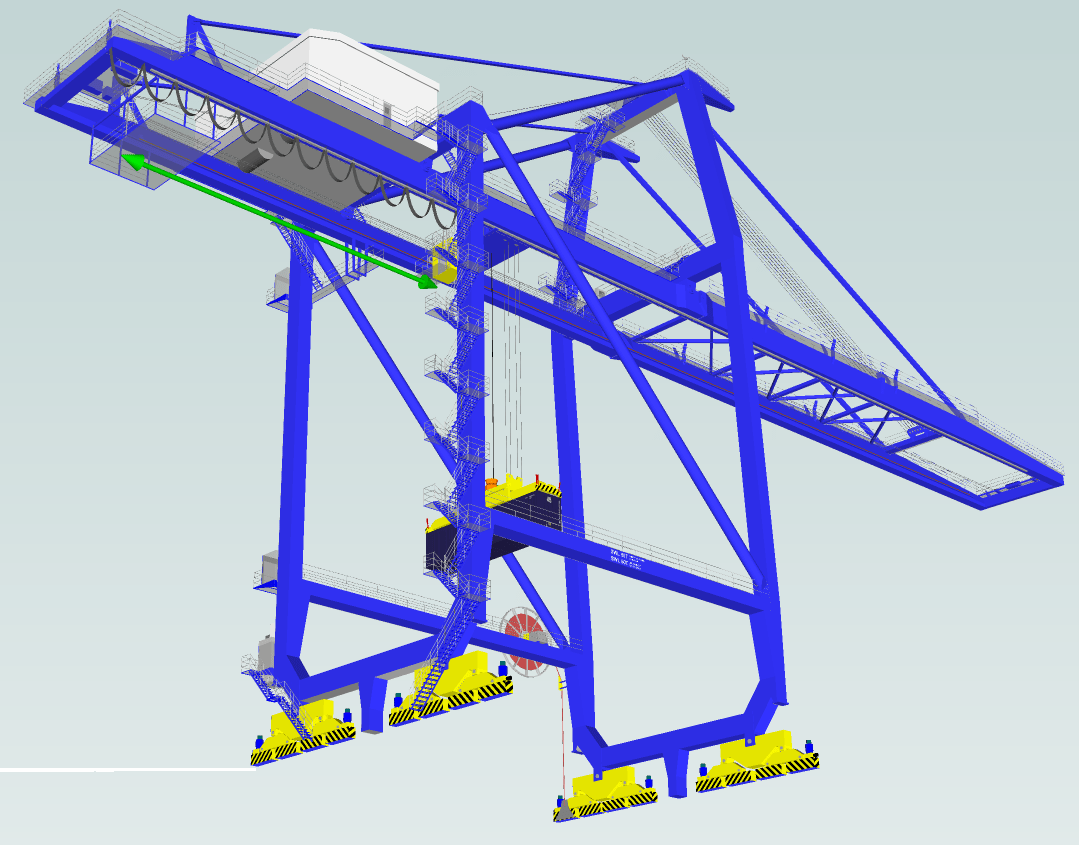 The KY-LOC 2D.03.01 positioning system allows all CHE on the terminal to determine its 2D position, heading and speed precisely and dynamically, even under and next to high cranes that shield or disturb GNSS reception.

So-called 2D anchors are mounted on existing light poles or buildings. The vehicle receivers, the 2D nodes, are typically installed on the roof of the positioned vehicle and receive the Radar location signals of the anchors.

With an optional onboard Kymati radio device, all CHE can emit their own movement data and their physical shape over the airwaves. All other CHE do the same. The onboard radio device can hear all messages over the air that are close enough. Each CHE now has a clear picture of its own movement and the movement of other equipment near by and can determine its own collision risk, in order to slow down or stop its movement(s). Additionally, permanent and temporary obstacles can be entered into a database that is repeatedly updated on all CHE. These obstacles (hatch covers, light poles, temporary construction works) are also considered by the protection algorithm. This collision avoidance functionality does not have a single point of failure, and is not affected by the latency of any network connection.
+ 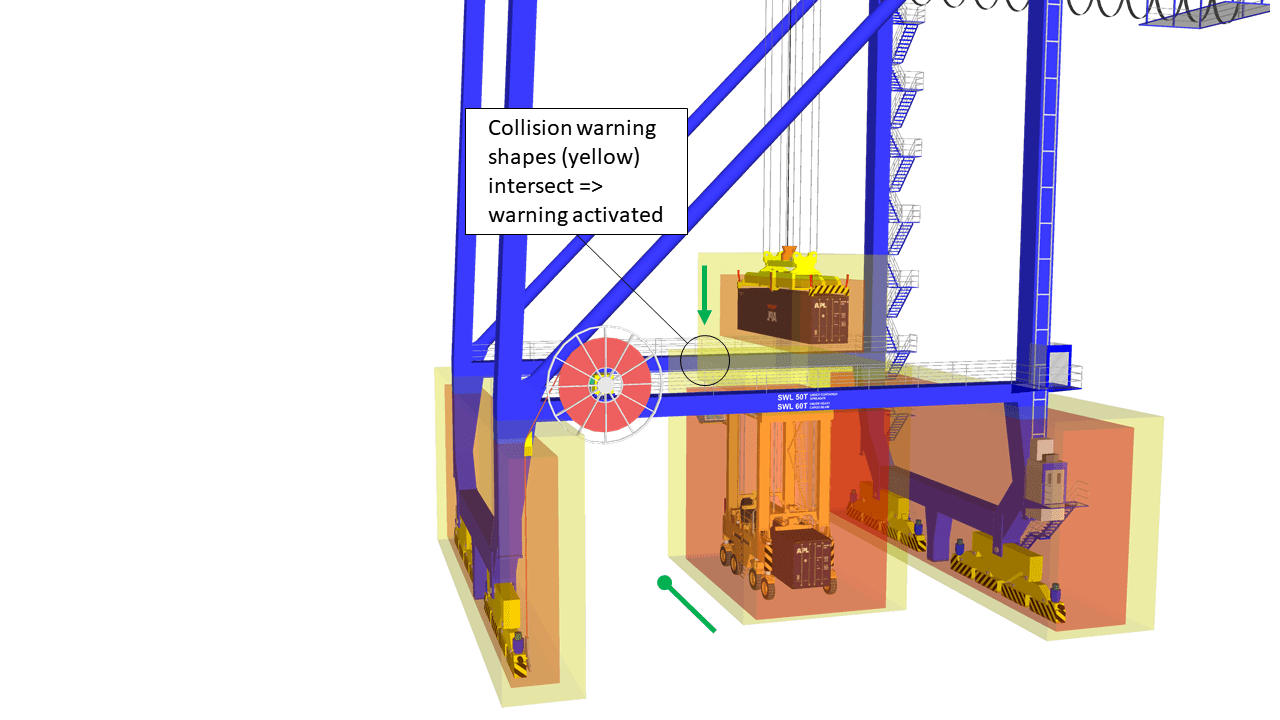 Collision warning between spreader/container and straddle carrier
(Click to enlarge) 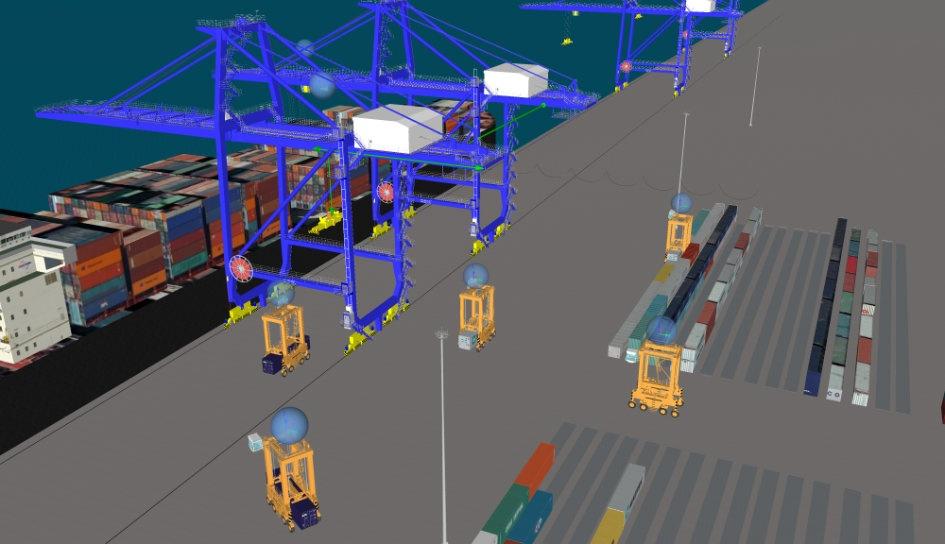 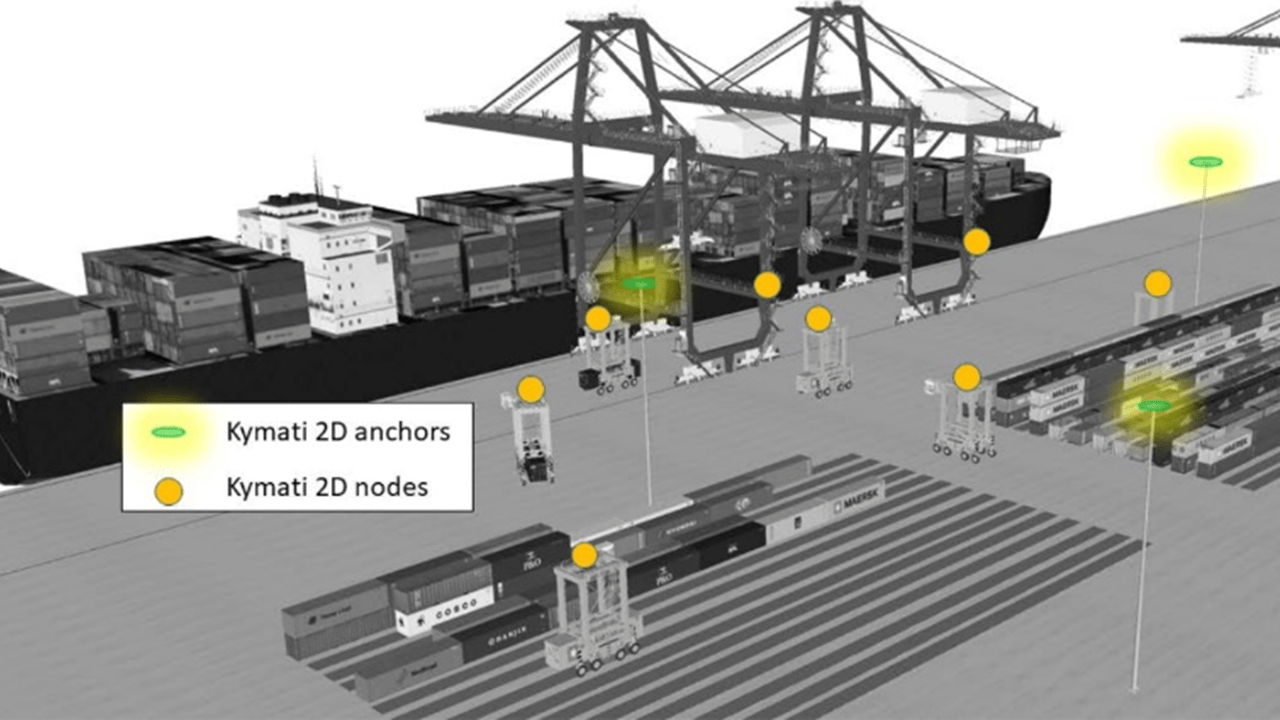 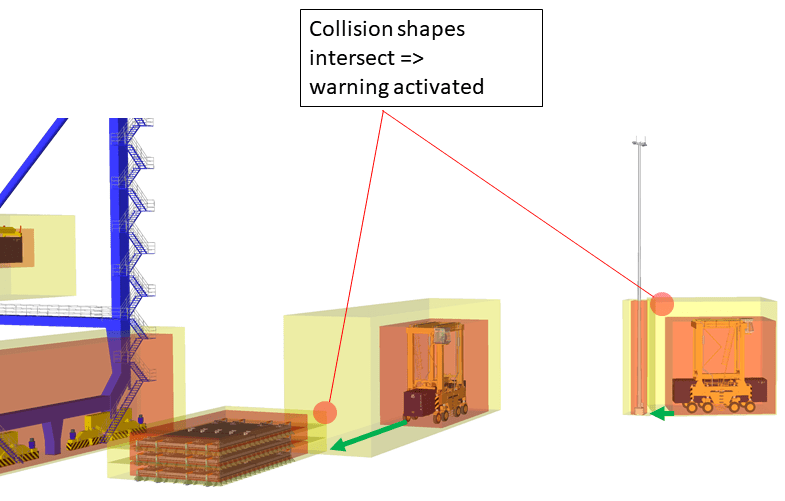 The KY-SOFT V.01.01 OMNI 3D visualization provides a real-time representation of the ongoing operations on the terminal.
All movement and messages are recorded in the databse with their time stamp. Any situation can be viewed live or replayed from any chosen 3D viewport.

We use cookies on our website. Some of them are essential for the operation of the site, while others help us to improve this site and the user experience (tracking cookies). You can decide for yourself whether you want to allow cookies or not. Please note that if you reject them, you may not be able to use all the functionalities of the site.